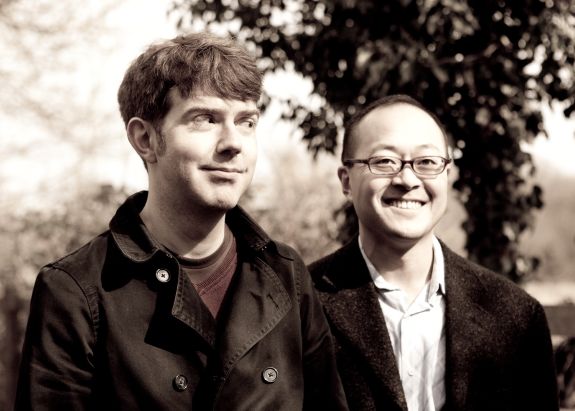 This website is where Donny and I will document our experiences in planning our big gay wedding.

The idea of doing this site is because we found there is a lack of good online materials out there that give advice and experience on this brave new world of gay weddings. So we have decided to make a start on creating some sort of resource by documenting all the things that occur to us and the bumps in the road we hit along the way. We also hope for this site to become a resource for other gay and lesbian folk who may find themselves facing some of the many issues and challenges that we have faced (and will face) in our relationship, which spans two nationalities, two faiths, and two cultural and ethnic identities.

I’m 35 and work for myself as a web designer. I was born and raised as part of a Charismatic Christian community in Surrey, in the suburbs of London, which led to me being MASSIVELY in denial about the fact I was gay for many years, but then I eventually came out when I was 24 – and I haven’t looked back. Over my career as a card-carrying homo I’ve been involved in various gay Christian organisations, and I currently spend a lot of my time playing trumpet with the London Gay Symphonic Winds – www.lgsw.org.uk.

Donny is 38 and works in the City of London for a U.S.-based pharmaceutical market research firm. He was born in Hong Kong and moved to San Francisco when he was an infant. Since then, he has developed a strong cultural identity as an American of Chinese descent, although he is becoming more and more British by the day. When he was 17 he moved to Boston to go to college and explore the wonderful world of boys and tennis. He met his former partner soon after and lived with him in the Boston area for the next 14 years. When that relationship ended Donny moved to London.

We met in 2007 on a walking holiday in the Isle of Wight and bonded over a mutual interest in travel, unusual foods and people watching. I moved into Donny’s place in London in 2010 and after a year of blissful cohabitation (yes, really) we got engaged – but more of that in another article.

Now we face the responsibility of coming with a plan for an inter-racial, multi-faith, multicultural, inter-national, trans-continental wedding.

If you’d like to get in touch, drop an email to chris@randomriver.net