Quite a lot actually.

Yesterday, a Facebook friend of mine posted a link to the ‘Coalition for Marriage’, an organisation which is campaigning to keep the institution of marriage as purely a heterosexual affair. He was encouraging his Facebook contacts to sign a petition on the site, and when he was challenged about why he was doing this, he explained that it was because it was his religious view that the definition of marriage should be kept restricted to only being between a man and a woman. 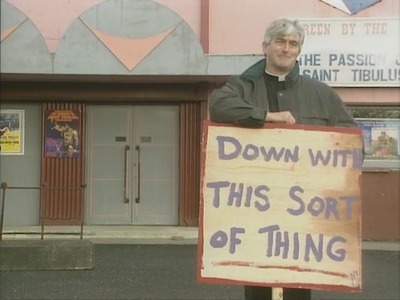 This actually made my blood properly boil. Not only is this guy fully aware that many of his friends have gay friends and family members who are in committed relationships, but also (as he keeps mentioning on his status updates) he’s getting married later this year and so what he’s basically saying to me (and people like me) is ‘I get to call it a marriage, but you don’t’.

My response to this was to post a fairly angry response and then defriend him, but sadly Facebook doesn’t support the ability to flounce off in this manner, as when you defriend someone, your posts get hidden. If you ask me, that’s a terrible design flaw. Anyway, for the record, here is roughly what I posted:

“I don’t know whether you know this but I’m getting married later this year! To a man! Surprise! So although this is goodbye, I hope you’ll do some soul-searching and think about why you’d want to deny me the thing that you are clearly so looking forward to.”

Now, I know it’s true that Donny and I are not getting technically married – we are entering into a civil partnership and that’s marvellous – but I don’t see why we can’t call it a marriage, and use that word in all the invites and along the top of this very website. In my mind, what we are doing is absolutely a marriage and I’m not going to have a bunch of social conservatives telling me otherwise. It’s how Donny and I see it, and surely that’s the only thing that matters.

For me personally, whether we get legally married or civilly-partnered is neither here nor there, but it is incredibly important to lots of my friends who belive very strongly in the institution of marriage, but just aren’t wired in a way that allows them to currently participate in it. So I don’t see how extending the institution of marriage to include same-sex couples is going to somehow cause difficulties for society and lead to polygamy – there is a big difference between wanting to marry one person and wanting to marry three people, whatever their gender. And is telling children that same-sex couples exist and can get married really going to be such a terrible thing?

I have to admit I choked up slightly too when I watched this lady speak. (She’s a republican, by the way, from Walla Walla). On Monday February 18, 2012, Washington will become the latest state to legalize same-sex marriages (not domestic partnerships, but actual marriage). And this is coming on the back of news that the U.S. Circuit Court of Appeals (just below the Supreme court in the hierarchy) ruled the ban on same-sex marriages in California to be unconstitutional on February 7, 2012. Meanwhile, here in the UK, the Tory prime minister and many other prominent Tories seem to be in favor of legalizing same-sex marriages also (although they are facing some dissent from the conservative base).

Many of you know that after 5 years in the U.K., I am in the midst of applying for my permanent residency (aka Indefinite Leave to Remain). This is the equivalent of a U.S. green card, which will allow me to enter the U.K. at will, and to live and work here as well. As of right now, I’m still without my passport, which was delivered to the solicitors’ office last week but I hope everything will get settled sometime next week.

It turns out that it is a good thing that I am getting permanent residency, as the UK does require proof that I am able to stay in the U.K. as a condition of granting a civil partnership license. I would have otherwise have had to file special paperwork that would, after the civil union was completed, allow me to apply for a spousal visa to stay in the U.K. Anyways, either way, I am sorted, here in the U.K. at least, since civil partnerships carry all the weight, rights, and privileges as marriage in this country (in all but name, but that’s a story for another day).

However, things are quite different with the U.S. government and I did some investigating recently to see how Chris’s status may change once we get civilly partnered. Interestingly, if I was not a U.S. national, the U.S. federal government does have a pathway that allows the live-in partner of a temporary foreign worker who is seconded to the U.S. to live and work in the U.S. as well. Obviously, for political reasons, this is not publicized. But it does allow for a non-U.S. couple married or civilly partnered (or just co-habitating, even) to be together in the U.S., as long as both partners are not U.S. nationals.

Things get complicated when one of us is American, as will be the case with Chris and me. Immigration Equality (http://www.immigrationequality.org/), a U.S. legal organization that works to support immigration equality for LGBT and HIV-positive people, suggests that there are some detriments to reporting for Chris to declare his status as “married” or civilly partnered to a U.S. national when visiting the U.S. A tourist visa is just a tourist visa, but if the immigration authorities catch wind that a foreigner is coming to the U.S. to visit a spouse, the visitor can be tagged as having “immigration intent”, which means that the visitor can be denied entry while travelling under a tourist visa, because the assumption is that Chris would be trying to get into the U.S. to become an illegal immigrant. So the current recommendation is to be vague if interrogated about the reason for a visit, but to not lie if asked a direct question. Sounds to me like the U.S. government wants gay couples to “play nice” by staying closeted about their relationship status. Married heterosexual couples, however, face no such restrictions or extra levels of scrutiny when entering the U.S., and there is a pathway that exists for the U.S. half of the couple to sponsor a green card for his or her foreign half, which will allow for permanent residency (and eventually a path to citizenship).

So what about getting married in a state that allows gay marriage, such as New York or Massachusetts? Still no dice. While the individual state governments do not report to the Federal authorities about same-sex marriages (i.e., they won’t snitch on you), the borders of the United States are controlled by the federal government; the individual states have no jurisdiction over the immigration and border control queues at the airport. And so, while getting married in Massachusetts would allow you to file a joint tax return and give a few benefits (such as for inheritance and hospital visitation), it doesn’t allow a bi-national same-sex couple the rights to live together in the U.S. In the eyes of the federal government, Chris and I would be no more than strangers to one another.

And it is for this reason that everyone should be against the odious Defense of Marriage Act (a legacy of the Clinton administration) and Proposition 8–the only purpose of these measures was to prevent same-sex couples from sharing the same basic rights that married heterosexual couples take for granted.

So for the time being, I am glad to be living in the much more sensible environment of the U.K. (and Europe in general, where most countries have same-sex marriages or civil partnerships) and I will happy accept my permanent residency once the solicitors and the Home Office are done with their paperwork. And here’s to hoping for a brighter future for the U.S., where sad scenes like this one will be a thing of the past: Woman in same-sex couple faces deportation despite being married in Vermont. Otherwise, if I take everything at face value, it almost sounds like Chris and I would be better off if I didn’t have any ties to the U.S…