Choosing wedding outfits for a gay couple can be a minefield. Do you match? Do you complement? Do you co-ordinate? Should it be a surprise? In the end we decided to go for matching suits, but different ties. The suits we eventually settled on were we grey three-piece numbers from Charles Tyrwhitt. 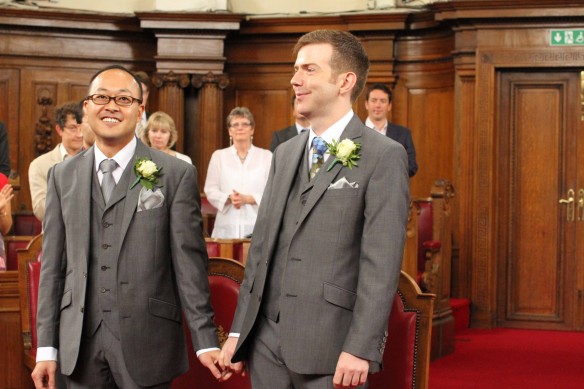 The ties we chose were both gifts from Donny’s dad in San Francisco. Also, the silver pocket squares were also made by Donny’s dad so it was really good to have a little piece of his parents there, even though they could not be there in person.

Donny’s shoes were awesome, as I think you’ll agree: Mine were somewhat less colourful, but super comfortable – which is a definite advantage of dressing well as a man – you can look fabulous and still have working feet at the end of a wedding.

As the day got hotter and later we lost the jackets to reveal my favourite part of the ensemble: 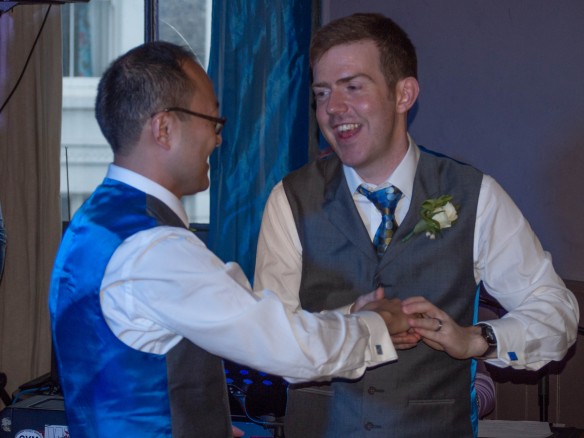 Our waistcoats had this fantastic electric blue fabric for the back, which just looked sensational (if I say so myself). It wasn’t a conscious choice to find outfits that matched the colour scheme of the wedding so well, but the fact that the suits we liked also had this amazing colour as part of the ensemble – well, it did rather seal the deal.

Those of you who have been following my part of the blog know that I have been dealing with a lot of conflicting feelings about my family and their reaction to the news that Chris and I are getting married. I genuinely did not know if my parents were happy about the situation or not. And they are probably as conflicted as I am.

On the one hand, I am certain that they were still holding on to a shred of hope that this “gay thing” was a passing fancy and that I would eventually find the right woman to settle down with. Getting married to another dude obviously dashes this last remaining hope to smithereens. (And never mind that I had previously been in a relationship with my ex for 14 years, which is still longer than the marriages of most of my school friends). If it is indeed a phase, it is one to be measured by decades rather than by seasons.

On the other hand, they have to feel at least a modicum of happiness that their younger son has found someone (whom they profess to also like) to spend the rest of his life with. The only thing is that the person whom I have fallen in love with is not of the gender that they had envisioned for me when I was growing up, and they still dont have the emotional wherewithal to embrace us for who I am, rather than who they think I should have been. So this modicum of happiness is likely to be bittersweet, at best.

So it was with a somewhat heavy heart that I landed in San Francisco last week. I had been in Philadelphia for a medical conference, and decided to tack on a few days in San Francisco for some client visits and to see my family. As a bonus, it was my brother’s 40th birthday and my older nephew’s 5th grade graduation, so there was plenty of opportunity for the whole family to get together.

One thing I noticed almost immediately was that the invitation we had sent to my parents was nowhere to be seen. I eventually found the invite and the save the date card, both tucked inside an old birthday day card inside a big pile of cards. The invite had obviously been hidden from sight, in case anyone visiting the house should see. I was not at all surprised by this (but I also could not help but feel a bit annoyed, since I knew that even wedding invites sent to them by distant acquaintances would often be displayed prominently on their dining table for months before and after the wedding was over.)

You see, I was already used to being marginalized in this way by my parents. For example, despite all those years that my ex and I were together, there were never any pictures of us on the fridge or any of the walls. However, the walls are festooned with pictures of my brother and his wife, and of their two kids. On the fridge there have only ever been two solitary pictures of me–one of me alone and one of me with my brother’s dog–and these have been up for well over 15 years. In this way, they could acknowledge that I existed, but also continue to fool themselves and others into thinking that I was not gay but merely single, as in the pictures.

And so, for the first couple of days, I did not mention the wedding. And neither did they. I had already written a lot about the Elephant in the Room, and they were still playing this game of avoidance. They had shown no interest at all in attending the wedding, or even talking about the wedding. So I needed some way to engage with them, and to connect with them because this game of avoidance is a zero-sum game, with no winners and only losers on all sides. Continued avoidance would just create further distance between us–an open wound which would eventually turn into a chasm or void. Life itself and the physical distance between us was hard enough. No family needs such additional obstacles.

My big opportunity to bond with my folks came from my suit, of all things. I had brought back my wedding suit for my dad to alter. He’s a master tailor with over 50 years of experience and it is not uncommon for me to bring back some “homework” for him to do in the form of trousers that need hemming, zippers that need repairing, or pockets that need re-lining. But for this suit, in addition to helping me save a few bucks, I thought it would be a good way to get him involved in the wedding, albeit indirectly. However, when I first brought out the suit for him to inspect, his first reaction was to ask, “Why on earth did you buy another suit? You already have so many suits that I have given you.” (Yes, that is how deep the power of avoidance and compartmentalization can be–he truly had no clue what the suit was for).

“It’s my wedding suit, I replied.” And then at last he understood. The change in his expression and demeanor were instant. And I finally saw a glimmer of hope that it was even possible for him to engage with me and with the wedding. He might not have the words to express his feelings, but his youngest son was going to get married, and he was determined to make sure that the suit fit me better than any suit he has ever worked with. After pinning and marking all the alterations that were needed with my outfit, I showed him a photo of Chris in his suit and in addition for chastising me for not having brought Chris’s suit for him to alter, he proceeded to document in detail all the changes that Chris’s outfit would need in order for his suit to also fit like a glove. We’ll be taking these instructions with us when we go back to the shop in London for Chris’ fitting.

My mom’s opportunity to participate came when I modeled the finished product for them. She came over for a look, and to fuss a bit over the outfit, and I could sense that she was proud of me and of the man I had become (although again, the words were lacking). She again lamented that the wedding was so far away, and that there was no way for her to get there without having to board a plane.

And finally, on my last morning in San Francisco, they presented me with a monetary wedding gift for me and Chris, with apologies about their inability to come to the wedding. Most importantly, however, the gift also came with verbal reassurance that they would be happy for us both, even though they wouldn’t be there in person. That was worth more than any amount of money. And so I was able to finally breathe a big sigh of relief, and to smile a bittersweet smile knowing how difficult of a journey it has been for them and for me to arrive at the very point we had just found ourselves at.